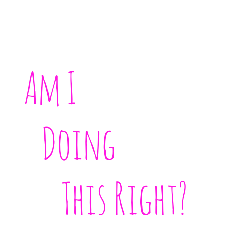 Has this thought ever come to mind while parenting your children, especially during the tough times.  Am I doing this whole parenting thing right. These little ones came into the world with no instruction booklet, no pause button like on a remote, no schedules nothing. Each day faces new challenges and some-days even after nearly 4years of parenting I don’t know if I am doing this right. But ultimately is there a “right way” to parent? I have read the what to expect books I have gone through the internet looking for advice and have read what some think is the right way but, there was no “THIS IS HOW YOU PROPERLY PARENT.” I think its because well no one really knows.  No one knows the correct time to potty train, the correct time to switch to solids, the correct time to wean from breast milk, or in my case when to take the dreaded pacifier away. Each kid is different and each child has their own timeline that sometimes we are aware of and other times they are the boss and we are just their employees so to say.

With baby #3 set to arrive early next year I wanted the new baby to be the only one with a paci so there was no sibling war between the two. With how we have done things in the past we like to take pacis away at 18months or if there is a problem prior. With Hannah I believe she got her taken away like a week shy of 18months because she bit a hole through her paci and well nervous mommy wasn’t a fan. It took a few days for her to realize it wasn’t coming back. I tried taking it away during the day first, then naps, then bedtime. I cut the pacis so she wouldn’t want it, I told her the story of the paci fairy, it was a long drawn out process. With still having a month left I started the process with Saul and took his paci away during the day. He still had it during car trips, naps, and bed. With teething it was better then those poor fingers in his mouth right? 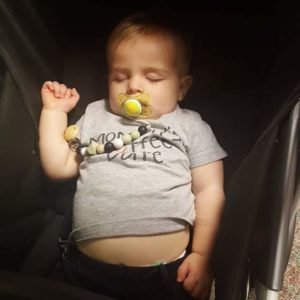 Well this past week the paci became a danger and I took it away cold turkey. He started to do this thing where he would keep the nipple part in his mouth but flip it so half the hard part was in his mouth too (see picture below.) He was, what I think, trying to fit it all in his mouth. First thing that popped into my head; Chocking Hazard. What if he did that while we were asleep and started chocking. All these scary thoughts came into my mind and thats when I decided we are done, cold turkey! There was no time to wean I took it and wasnt looking back. Then the night time came… 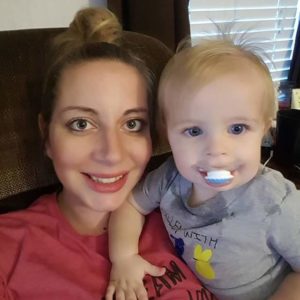 We had a normal night, normal nighttime routine but he knew something was missing. It took about an hour for him to fully fall asleep and I thought yes we are in the clear. Midnight rolls around and hes screaming, I let him scream for a bit then go check his diaper, turn his toy on and leave. Nothing worked. We were up from midnight to 4am. Being 6months pregnant Im sure those moms out there can relate to how exhausting pregnancy is in general, let alone when you have two other children to tend to. So I was not looking forward to the rest of the day when I would have to adult. I have to admit middle of the night Mommy gets cranky and my poor snoring husband got the brunt. Whoever said they want to sleep like a baby obviously doesn’t have children.

The rest of monday once the house was awake was a pretty good day. my exhaustion wasnt as bad as I thought it would be and I got alot done around the house. Naptime went so smooth! If you dont know we combined the kids rooms a few weeks ago and thats been its own struggle but Saul went down first and fell asleep quickly, hannah went for quiet time soon after (and actually stayed quiet for once.) I assume that was due to her being tired as well, since they share a room saul was keeping her up that first night until I moved her into our room to sleep. As the hours went on it was getting close to bedtime, that glorious time of night that moms are usually secretly excited for. We again did our normal nighttime routine, he went to bed at his normal time and the waiting game started. An hour later I started hans routine but brought her pjs and book outside of her room as to not wake saul since I knew the second I opened that door Id have a screaming baby on my hands. Lo and behold he was asleep and stayed asleep while I put her to bed! Hours went on and as I woke for my nightly 500 trips to the bathroom each time I anticipated for him to wake up but that didnt happen! For the first time in his life he slept the entire night! First full nights sleep! I was shocked. I woke up the next morning and actually felt tired with a good nights sleep odd but understandable.

I know many people do not believe in pacifiers and wonder why go to the work of starting a baby with one only to go through the hard process of taking them away. Of course its a personal choice as is everything with parenting.  But my kids are nursed and nursing a newborn has its ups and downs, the downs being the human pacifier. Where the baby isnt getting any milk they just want to use you as a paci. Having another child to attend to I couldnt be “hooked up” to the baby all day and we made the decision to use a paci. Same with Hannah. I already anticipate it with the next one as well. Plus selfishly Ill admit it is nice when the baby is crying to put in the mute plug and regain some quiet sanity.

What it boild down to is parenting is hardwork. There were so many times during that first night I wanted to give in and give him back the paci.  So many times I thought, maybe it was just a fluke and he wont do it again, am I making the right decision, maybe its too early, I should just give it back and let him use a paci until college whats the harm. Looking back I am happy I didnt give in and so far the paciwar hasnt been nearly as bad as it was with big sister, but we are only  two days in so time will tell. 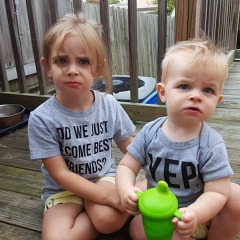 Until the next parenting battle!

One thought on “Am I doing this right?”