Skip to content
Posted on September 23, 2015 by Leah Posted in Uncategorized

A Picture speaks a thousand words or so they say. A few weeks back I saw a picture of myself right before I got pregnant with hannah and thought,Oh my goodness I was so tiny and yet back then I thought I was big. What was I thinking?!?! But we are our own biggest critics. I’ve never been one who struggled with my weight. In high school I was very athletic and maintained a healthy weight same with the first few years of marriage. But then between working the nigh shift at the hospital and depression following the lose of Sage food became my emotional outlet I guess you would say. My eating was out of control and I gained 30-40lbs in a short period. Right before I got pregnant with Hannah I got my butt in gear to lose all of that weight and I was on the right track. But thanks to pregnancy I gained a whooping 50lbs at least that’s what the scale said on the day I delivered. From walking, nursing and well giving birth I was able to drop 30 of that 50 fast. But the rest has been a struggle. Honestly the first year of being a new mother between the sleep depervation and praying I was doing everything right in this season of motherhood losing weight was not on my brain’s radar until I went to the doctor. One day at the doctors office I saw on my form “pregnancy complications due to obesity” what??  I didn’t have any pregnancy complications and I did not think I was obese there must be something wrong. But at last due to the wonderful thing called BMI I am considered obese. What happened to that athletic girl in high school where did she go? Did life just get to her and food became the only outlet she could find? And as I look at pictures I can see that.

I look at pictures of myself now and I honestly think to myself that in the future I do not want to look back on a picture I took in the last few weeks and think the same thing I thought above. Oh my goodness I was skinny and thought I was big. I want to look back and think, ” wow Leah, look at all the hardwork you did and how much it payed off” (as well as go to the doctors and show them that the “obese” girl is no longer here.)
Now I’m not saying  I’m going to lose every pound,especially since we don’t own a scale anymore because the number on a scale is not a healthy obsession, but I just want to be happy and healthy. I want to wake up in the morning with confidence and just overall feel good about myself. Even if I have to wake up at 5 and get on my bike to achieve that goal. Losing weight is difficult and can be quit frustrating but, if I wait to long to lose it than my journey will end up being harder. 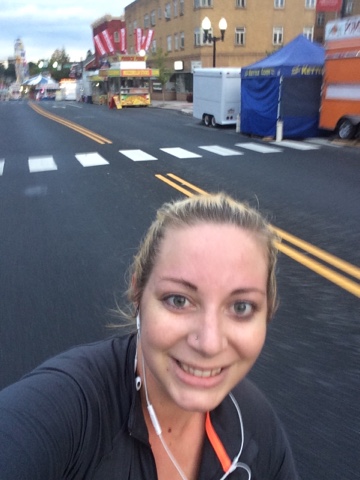 XO
Leah
P.s. That picture is a picture of a girl getting her confidence back one bike ride at a time.