Skip to content
Posted on September 16, 2015 by Leah Posted in Uncategorized

Yesterday I was in panic mode trying to figure out what to write. Some may think its no big deal if I miss a post but if I start slacking than I may never start blogging again and I actually enjoy it. After many ideas being suggested I think I have an idea so lets get started.
I was never that young girl who had dreams of what I wanted to be when I was older. After high school I wanted to be a police officer. I wanted to be similar to Miss Congeniality. That tough single girl who took down the bad guys, while keeping the public safe. Of course God had other plans. After working at camp I started nursing school. During school I still had zero idea of which Nursing field I wanted to work in. Labor and delivery, Peds, Nursing home no idea, but my classmates all knew and I was left like um what am I going to do when I’m out of school. During one of my rotations I met a women who was schizophrenic and oh my goodness I loved talking to this women. Oh course she called me Bobby and kept asking when we were going to “cross the river.” I would watch as she would talk to people who weren’t there or would have conversations with inanimate objects. That was when I knew Psych is were I would go after graduation. Thankfully,  I got married soon after graduation moved to PA and landed my first job after my very first interview at a Psych hospital not to far from my apartment. Working in the hospital was a lot harder than I thought but I knew these patients needed me. There were good times and there were bad times. There were times  my patients were super nice and we would have an easy shift. Than there were the bad times. The times where my patients would go into an episode and throw chairs clear across the unit, times when I would be attacked through my med window. Times when I was locked in my med-room until the situations were resolved. And of course the times where I had to unwrap sheets from around a patients neck or get broken glass out of someones hand before they swallowed it. Very scary times were I wasn’t sure why I kept going back. But then I realized I was there because God put me there and my patients needed me. When I would do my checks I would ask each patient if they would want me to pray with them, and they did! I would pray with some of the patients before I left my shift and would share Bible stories with them. It helped them and it also helped me. When it was time for me to move on from the hospital it was rough but I knew that it was the right move and boy do I miss some of my patients. I will never forget them and everything I learned from the hospital.
During the time in the hosiptal and even now as the Head Nurse of Handi*Camp I’ve learned something. I’m not just their nurse I am their friend as well. Just like the fact Im not just a mom, just a wife,  just a daughter, just a sister. I’m Leah a mother, a friend, a daughter, missionary, cousin, wife and of course  a nurse. This is not the life I envisioned for myself  but its a lot better than I thought it would be and I’m proud of all that Ive accomplished and been through. I will gladly put on my “doctor stethoscope” and make sure all my campers are safe, give out their meds, and be a hand to hold when they need it. It takes a special person to be a nurse and I am happy I get to share this sisterhood (and brotherhood) of nurses with so many amazing people. 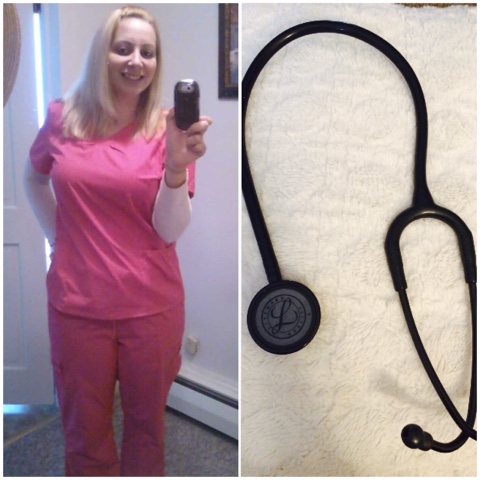