Skip to content
Posted on October 28, 2014 by Leah Posted in Uncategorized

Running used to be a way of life for me. I absolutely loved running,and since I played field hockey I didn’t have a choice. I couldn’t even count how many miles we ran during the day whether it was practice or a game. All I knew was to be on varsity I had to run a mile in under 8 minutes. So I worked hard to achieve that. Instead of running just run I used it as an escape. Just me and the road I was on. Eventually I started to do 5ks which added my other favorite thing to the loop competition. Except my competition was myself. I wasn’t the best runner but I would set goals for myself to beat. Once I got out of high school I didn’t run as much, but feel down I missed it.

Fast forward a few years and I’m married pregnant with my first daughter and I hear about a mud run. Sounds amazing! Getting muddy while running. How exciting! Except I had to push it off a year due to being pregnant. Bummer lol on a bright side more time to train once the baby got here right…wrong lol
May 2014 the night before the mud run my nerves were shot and “what was I thinking” running through my head. Of course I was 4 months post partum so my goal was just to finish. And I did! Came in dead last but was proud of myself for completing it.  I was hoping to do more races but things didn’t pan out through the year. Now 10 months post partum and I completed another 5k and made it in the time I was hoping for. Oh and I wasn’t last this time 😉 added bonus.
I really hope I can keep up with running and do more races as it’s an escape for me and quite relaxing. Hopefully this will also be a positive influence in my daughter (and future children) lives. 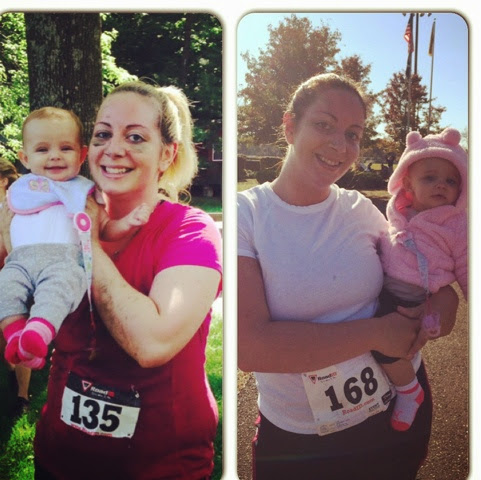