Skip to content
Posted on November 2, 2015 by Leah Posted in Uncategorized

Looks like we have entered this wonderful journey of no more paci. It’s a journey that all parents eventually venture into and it’s wonderful. Full of smiles, and restful nights sleep, lots of hugs and thank you’s from the child….yea right. Pretty much the opposite of everything I just said and we are only at day 2. Since my husband and I are geniuses we decided to start this journey on Saturday night. Unfortunately we forgot it was daylight savings. So we were already going to lose an hour of sleep and now we were going to lose even more sleep. (Note to self write daylight savings on the calendar for now on.). Now let me say i am not against the use of a paci. Each parent has their own way of doing things and has their own time frame of paci use. Hannah has really sharp teeth and one paci already broke from her biting it. So as a preventative we decided to be finished with paci’s. It started that she would only have a pacifier during nap/bedtime. No longer would she have it during the day, on outings, or in the car. We did make a few exceptions to the rule though. I really wish we would have started to take it away at nap time than a few days later bedtime. But since we started at bedtime there was no looking back and we had to get rid of it all together.

The first night was horrible! Screaming and crying honestly I have no idea how long it took her to fall asleep because quite frankly I was crying a long with her. Already rare naptime was even more rare as she was in her room for hours with no nap. The roughest days are when Kyle isn’t home for bedtime and I have to pull out all I have. So I started by giving her the broken paci, she realized it didn’t feel right. I told her it was broken and she agreed to throw it away. Ive told her stories about a long time ago there was a princess who became a big girl and didn’t need her paci. Hannah loves being called a big girl and I think that story helped a bit. I’ve also sang her to sleep which hasn’t happened in a long time.
I get what most would say “she isn’t ready for her paci to be taken away.” “Your so mean” “I’d never do that to my child”. But hey we’re all different. Hannah only used her paci to fall asleep than wouldn’t use it the rest of the night. But during that falling asleep phase she would bite it so hard it breaks. It’s what’s best for her. Even if she doesn’t realize it right now. Sometimes being mom means I have to be “mean” and do what’s best for her, she still hugs me and tells me she loves me before bedtime, before the screaming starts so she can’t be too mad at me. One day we will look back on this day and laugh as Hannah becomes a mom and takes the paci away from her child.
XO
Leah 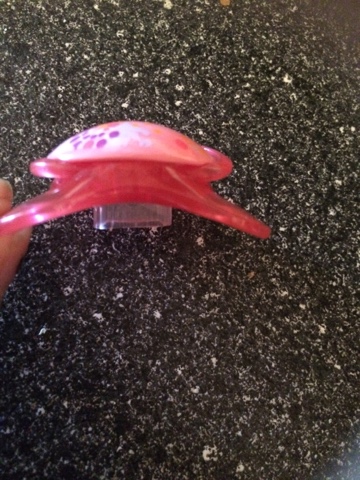