Skip to content
Posted on October 8, 2015 by Leah Posted in Uncategorized
Those who have read my blog or know me personally know that dear dear Hannah has hit “turbo” twos early. Everything is go go go and there is no time to stop for anything including food. Meal times have become a struggle (to the point that I’m not sure which is worse napstrike or food strike.) I’ve fed her favorite meals but unless it’s a banana or a piece of bread she isn’t having it.  I feel like I’ve tried every trick in the book to get this girl to eat! We’ve even done the whole “you can’t have a banana until you have 5 more bites” and boy are those last  5 bites terrible! I honestly can’t remember the last time she’s finished a meal without a fit or us having to substitute the food. I realized a few days ago that she likes it if I eat the same thing as she does so I’ve intentionally been doing that, but that’s only helped a tad. Tonight was a whole other story!
When you have a toddler who doesn’t eat mealtime can be super stressful. I made one of her favorites but I was waiting for the few bites in and her saying she was finished. Right on cue it happened so the “5 bites and then you can be done” as well as the waterworks started. I looked around and saw this small blue toothpick holder on my lazy Susie. Now this toothpick holder isn’t just an ordinary holder. I received this toothpick holder from my grandparents house after my grandpop passed. And me being sentimental kept the same toothpicks in there from when it was at his house. No new toothpicks have gone in and none have been used. Anyway back to the story, I remembered how much Hannah loves sorting and putting things away so I decided to pull out 5 toothpicks and tell her this is how many bites she has left. Everytime she takes a bite she can put a toothpick back. She agreed and hesitantly ate ALL 5 bites! I jokingly asked if she wanted to do it again. She did! So I poured out all the toothpicks. She was double fisting her food and at times forgot our “game.” Well low and behold she ate her entire meal!!! As well as a banana! I am one proud mom and yes I totally patted myself on the back for that one!
Sometimes I think that I think too much about into the situation and how frustrating things are instead of thinking how to make things fun so we can both accomplish our goal…her eating, and me not going crazy.   Next time your in a tough situation maybe think about an out of the box way to fix it, or just look for a set of toothpicks 😉
XO
Leah 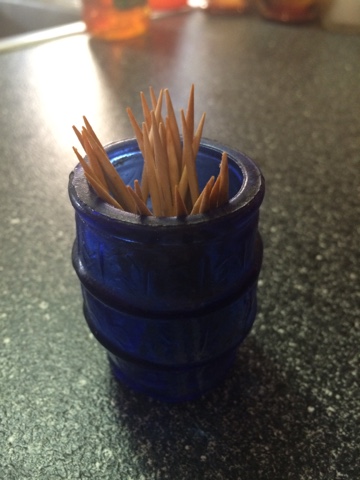