Posted on November 15, 2017 by Leah Posted in Motherhood

Noun: The state of being a mother. At least that’s the definition on Dictionary.com. What I did not see under the definition was, never ever being able to be alone ever!

If you follow me on any of my social media platforms you may have seen a picture I posted yesterday of little feet under my bathroom door. The story preceding that picture is as followed. The kids were quietly “playing” aka destroying the house so it was a perfect time for me to run into the bathroom to see if there was something in one of the drawers. Nothing exciting at all. Literally seconds after entering I hear a banging on the door and  little fingers reaching from under the door. I mean to be honest I’m pregnant so I do spend a lot of time in the bathroom and every single time those little fingers are reaching under the door. 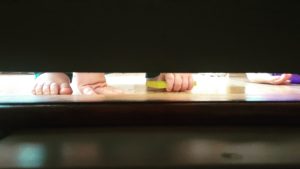 I remember telling my husband once that I cant shower unless he is home because it could be the middle of the night and both kids will wake up and need me the second I get in. He didn’t believe me until I proved it to him. My husband was downstairs with our three year old the one year old was fast asleep so since hubby was home I jumped in the shower. I lathered up my hair with shampoo and I hear this little voice “mommy can you wipe me” After I got over the scare of hearing my three year old since she was downstairs I couldn’t help but laugh. She walked passed my husband passed the downstairs bathroom to come up to me to wipe her. When I got out of the shower and told my hubby he couldn’t help but laugh since he thought she was going upstairs to get a toy.

Motherhood is such a funny season of life. I mean I spend nine months with the child 24/7 and once they are out of the womb they still wont leave me alone. My husband does a terrific job of telling them to leave me alone when he notices but it still is quite comical. At times I feel like a mother duck with her little chicks in tow. Im going to be honest though since Saul started walking he has been that duckling walking a little to close behind me meaning there has been numerous times he has literally walked into my leg and bounced off.

I absolutely love being a mother and even though I am never alone its only for a short time. Soon Ill be able to take hour long showers alone, go to the bathroom without an audience and not wake up with a 3yr old poking my face. Even though at times it bugs me I love it because it wont be forever and in a blink of an eye they will be married and moved out experiencing the fun of motherhood/parenthood that me and Kyle are going through now, and I will be right there to remind them of all this! Isn’t that the bright side of all this?  Laugh when our kids go through what they put us through while offering support? 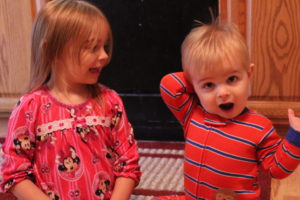 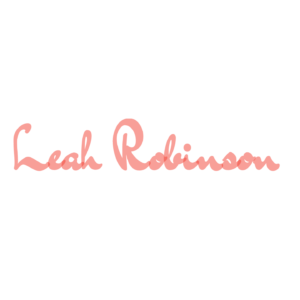