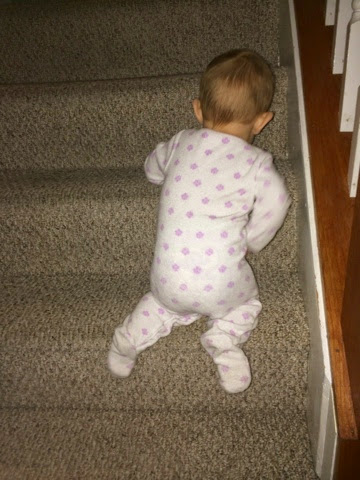 Wow it’s been a little while since I’ve written. I’m already slacking. Anyway today I will talk about my 5 confessions about being a mommy and some I didn’t realize I even did them until today

1) Calling Hannah by a different name. Yes sometimes I accidently call her by the dogs name guilty as charged. But other times I like to test out our future children’s names on her. Someone once told me when testing out baby names to yell them and see how that feels. I don’t know how true that is. So if you see me out in public and I accidently call Hannah hazel or grunka (Kyle) you’ll know why.
2) Sometimes I let Hannah get away with stuff on purpose. She thinks it’s hilarious to climb the stairs she will look at me giggle and keep climbing. I only let her get to the second step before I “catch” her. Of course she thinks it’s hilarious and try to climb the steps faster. I live for those giggles though.
3) I have heard so many moms say how they have found themselves watching their kids shows and not realizing it. Yup this has happened more times than I’d like to admit. Doc mcstuffins she is a girl after my own heart and I’ll leave it at that.
4) I’m so jealous that Hannah says dada instead of mama but I’m happy at the same time. Even though I try to teach her to say mama everyday she only does when she is super upset. But, she will crawl around the house all day saying dada and you better believe when he walks in the door age gets a huge smile and looks at him and says dada. I guess it’s a nice trade since I’m home with her all day. And I love that even if my husband had a bad day at work that can bring him an instant smile.
5). This may be the worst confession. Sometimes I laugh uncontrollably when Hannah falls. Now I’m not talking about when she falls and gets hurt that would be mean. But an example; yesterday she was pushing her toy and it honestly looked like when a cartoon character slips on ice.  I couldn’t stop laughing and poor Hannah is laying there trying to figure out if she should laugh or
cry. She did manage some crocodile tears though but I promise she is a-okay.
Until next time
Leah