That pretty much sums up life since Saul was born almost 6 months ago! To be honest Saul is an awful sleeper. Like 15min catnap here and there. On a good night ill get 4hours of sleep (not consectivly more like a half hour here and there maybe an hour thrown in) To say I’m tired is an understatement. Last night was the worst he was up all night! And when he’s awake the whole world knows. I got tired of getting up and down so I brought him downstairs to “cuddle” Yes cuddling is in quotes since my boy doesn’t cuddle, try cuddling a cat and that’s like trying to cuddle Saul lol. But while we were downstairs I realized something…
I love this! Yes I am exhausted and forget my own name but while I was nursing him I realized how quiet it was. It reminded me of the first snow fall when there’s no cars outside and it’s a beautiful quiet. I looked down at my not so sleepy nursing son and he gave me the biggest giggle and smile. And I realized this time with him won’t last. This time of just me and him before the busyness of the day will soon be a memory. During the day between cleaning the house and entertaining the toddler I don’t get a ton of time with my boy so this time while the rest of the world is sleeping is our time. And even though it would be a gift to get 5 straight hours of sleep for now ill take this sleep deprivation. In a blink of an eye he will be a toddler and then a teenager and then hopefully married and moved out, soon he won’t need me as much as he does now. I gotta take the good with the bad, look at the silver lining ya know all those cliche sayings.
So the next time you see me with bags under my eyes so bad Michael Korhs named a purse after them, just know that on the inside I absolutely love this life I was given, sleep deprivation and all! 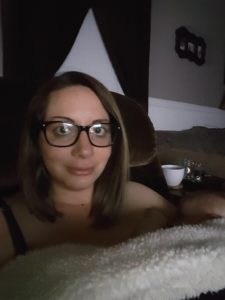